The unique wetland between Galé (Albufeira) and Armaçao de Pêra (Silves) is under serious threat as the Millennium Bank is attempting a project involving hotels, approximately 350 residential units in a tourist village that also includes an 18-hole golf course Selling.

Now, the Portuguese government has given the go-ahead to «develop» most of the 359 hectares. But «developing» in this case means «recasting». Thus, the area is lost to the wildlife, but for which it is vital.

Especially this area is particularly valuable for the animal world. If it is destroyed, it can not be replaced.

Appreciation for unique habitats instead of hotels

The Algarve has enough hotels and accommodations for vacationers at 55% occupancy. Similarly, 40 golf courses for the Portuguese South should be more than enough.

However, what the Algarve needs is the appreciation of its unique habitats and their dependent wildlife.

Frank McClintock asks for signatures so that the issue can be addressed in Parliament. The petition currently has about 34,000 signatures and would like to reach 50,000.

In the petition, Frank McClintock, the initiator, explains that Lagoa dos Salgados and its surrounding area is one of the few intact areas right on the coast. Construction would significantly affect the wildlife of the lagoon

The lagoon is used annually by thousands of birds for migration. It serves the birds for the winter and as a breeding place.

Many rare species live there and the Portuguese government has committed to protect them. The conservation of these species will not take place if the so-called «development» is approved.

Please help to get the signatures needed to address this issue in Parliament.

Your vote for the preservation of a special nature area.

A previous petition has managed to convince the government that an Environmental Impact Assessment (EIA) will be carried out before approval is granted. That was a great success – but it’s just one step in the path.

This EIA has now been published. Since it was commissioned by the developer, there are doubts about independence.

There is now time until 26th July to submit «comments».
Various NGOs are responding to the technical aspects of EIA here in Portugal, but the full document can only be seen in different places in Portugal as an expression, and no one can leave a comment unless he actually comes here in person.

The non-technical CV of the EIA is available in Portuguese at http://ccdr-alg.pt/ccdr/parameters/ccdr-alg/files/File/documentos/noticias/RNT_PPPraia%20Grande.pdf

Anyone who does not understand the Portuguese, but has a chance to respond and leave a comment.
Just a minute for the Lagoa dos Salgados. 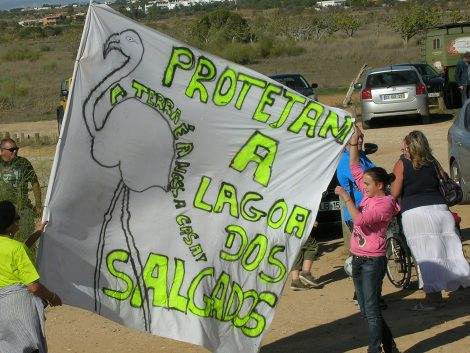 Frank McClintock collects all the comments to pass them on to the relevant authorities. So take a minute and write your opinion in an email to info@paradiseinportugal.com with the subject «Salgados».

Together, there is a chance to be heard and to save this special place.

Just a minute to work for the protection of the wild animals living there and a valuable piece of nature. Just a moment to get something for our offspring that will otherwise be lost forever.

On behalf of Frank McClintock Thank you